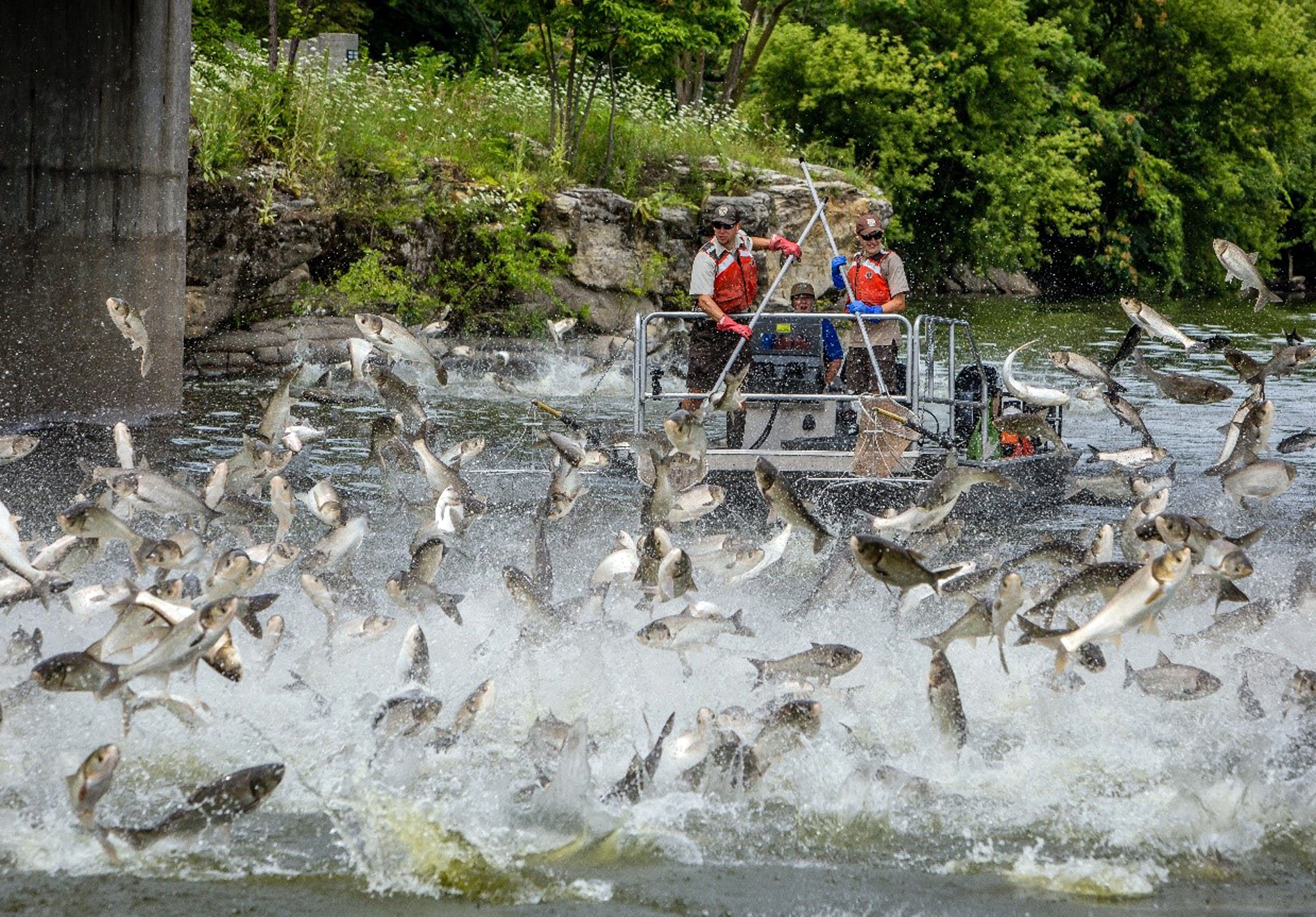 The National Wildlife Federation (NWF), North America’s largest conservation organization, has been working aggressively for years to raise awareness of and implement action against the continued spread of invasive Asian carp. Like many problems facing our environment and natural world, Asian carp are for most people, out of sight, out of mind. But if you take a boat ride down any major Midwestern river connected to the Mississippi, you’ll likely come to understand how large the population of these invasive carp has grown to be and what a problem they have become for native fish species.

I was recently catfishing on the Missouri River near Boonville, Missouri. As we motored into a back slough, Asian carp began jumping out of the water all around us. They are so prevalent these days, my fishing buddy, Dave Grabber, doesn’t bring cut bait anymore. Instead, he drives his boat in a slow circle and waits for an Asian carp to jump in the boat. Works every time, he says.

The general population may not understand how critical of a problem the Asian carp invasion has become. These fish outcompete natives for food, and top spawning and feeding locations. The NWF Great Lakes Regional Center recently released a film called Against the Current to highlight the destruction these fish are causing to the environment and the economy in industries reliant on our Midwestern river fisheries. It also addresses the catastrophe we’d be facing if Asian carp become populated in the Great Lakes. The film features diverse viewpoints representing scientific, tribal, business, tourism, fishing, outdoor recreation, and conservation communities from northern Michigan to Tennessee.

“We deliberately explored the often underpublicized, but extremely important, values at risk from invasive Asian carp across a wide swath of the country.” said Drew YoungeDyke, director of conservation partnerships for the National Wildlife Federation Great Lakes Regional Center and executive producer of the film. “We often hear of potential impacts to the Great Lakes sport fishery but we also wanted to show the threat to connected inland waters, tribal fisheries, and the outdoor recreation and tourism economies.”

Many people fail to realize how connected local economies are to outdoor recreation. In the state of Michigan, for example, outdoor recreation has a $26 billion dollar annual economic impact. A significant portion of this amount is related to water recreation, which Asian carp jeopardize.

According to the U.S. Fish & Wildlife Service, “As large populations of Asian carp become established, cumulative effects of those species include risk to human safety, reductions of native plants that provide spawning and nursery areas for fishes, reduced food for native fishes and waterfowl, and reductions in dollars for regional economies that rely on fishing, boating, and waterfowl hunting.”

Federal, state, and local agencies, like the US Fish and Wildlife Service, along with non-profits and supporting businesses, are pouring resources of money and manpower into the eradication of Asian carp, but they are such prolific breeders, it is hard to make a significant impact.

“We hear frustration that nothing is being done about Asian carp, so we wanted to show some of the projects already completed, as well as the things that still need to be done to stop Asian carp. We wanted to show the impact they’re already having in places that we don’t often hear about like inland rivers in Indiana, and in ways we don’t often hear about like property values and even duck hunting in Tennessee. The film shows that Asian carp aren’t just a Great Lakes fishing issue, they’re a national issue affecting our waters, our economies, and our way of life.”

My longtime friend, “Paddle Don” Cranfill makes an appearance in Against the Current to talk about the impact the Asian carp have had on the fishing in a couple of rivers near and dear to my heart in Indiana, the East Fork of the White River and the Tippecanoe River. When you start drilling down to your local waters, like these are for Don, the negative effects of Asian carp become a much closer to home problem.

To learn more about Asian carp and what is being done to combat them, spend 20 minutes to Against the Current. I think you’ll be surprised about what you learn.

Pic: Sadly, scenes like these with Asian carp jumping out of the water are becoming more common in rivers across the Midwest. (Photo Credit: USFWS)