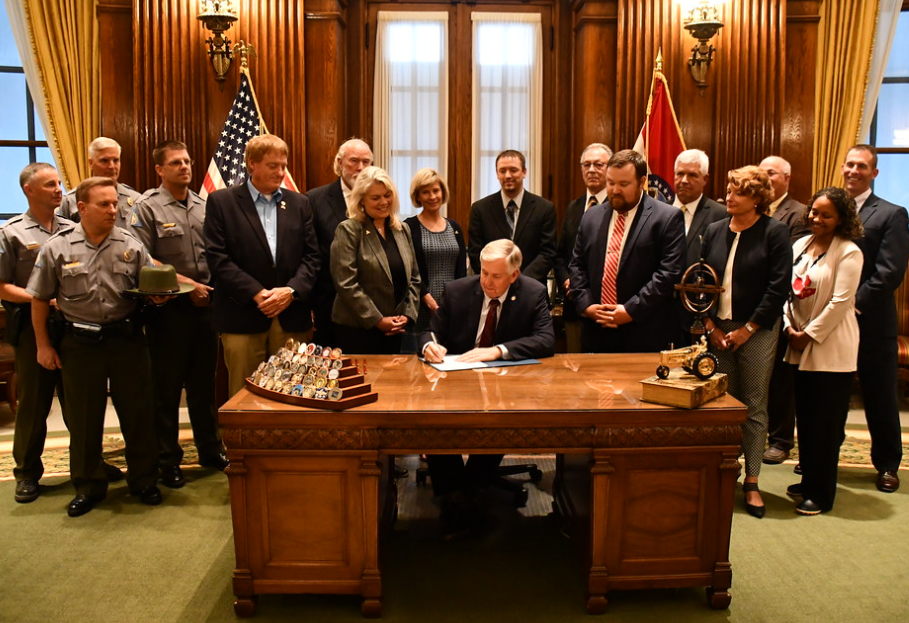 Opening weekend of Missouri’s firearms deer season was a disappointment, to put it mildly. Only one of the six hunters in our camp took a buck. The weather certainly did not cooperate. Rain, wind and lighting all impacted our hunting efforts, but it was the brazen, illegal act of poachers that really ruined the experience we had anxiously waited for all year.

Saturday morning found me more than a mile deep in the forest, high upon an Ozark ridge. This same spot has been good to me over the last few years. It’s a long hike in, but usually worth it to experience the solitude and deer encounters. This year was different.

About 30 minutes after daylight, I heard a stick snap behind me. Sure I was about to lay my eyes on a big buck, I was dismayed to see another hunter working his way down the old logging road I was sitting on. The nearest access site to this part of the public forest was more than two miles to the east. Obviously, this person had ignored the signs that clearly state motorized vehicles are not allowed. When he saw me, he waved and turned around.

To one up that fella, my heart sank when I heard a vehicle headed my way at a rapid pace. Sure enough, a jeep came barreling down the ridge. I stood up in my stand and waved at them, but they didn’t see me. I guess they were driving too fast. When they were less than 20 yards from me, I yelled, “Hey.” They stopped, complained about how many people were hunting, then turned around and went back the way they came.

Then the dogs started. If you have ever heard the horror stories of packs of hounds running deer through the Ozarks, let me tell you, in some areas, it’s worse than you can imagine. It goes on without regard for the fact that it’s both illegal and ruins the hunting experience for the majority of people out in the woods hoping for a deer to wander by. With hundreds of thousands of acres of public land around, I still had two packs of hounds run through my 40 acres on opening morning alone. From that point on, the hounds were constant. Pickup trucks with dog boxes just casually cruise into the hollow and release their dogs to run the long drainages and ridges.

The argument is it’s their tradition. Well, it’s illegal for a number of reasons, including the ethics of running deer, but what I’m most concerned with is how it ruins the hunting experience for everyone around who is trying to hunt legally. It ruins our traditions. I have invested so much time and money in my dream hunting property. I have greatly improved my land’s wildlife habitat. I plant food plots and try to hold deer on and around my place. Then on opening weekend, pack after pack of hounds are released and run everything off. The dogs don’t know property lines, and their owners who do, simply don’t care.

Then the worst of the worst happened. It’s still hard to believe it was real. Four of us were sitting around a campfire on Sunday night. We’d had a rough weekend, but were looking forward to the crowds thinning out on Monday. It was around 8:30 p.m., so it’d been dark for three hours. We watched a truck roll down the hill leading into the hollow. It drove past my house and out into a private field about 100 yards off my land. They stopped not 50 yards behind my neighbor’s cabin. This field belonged to a man who recently died, so some may have been aware it was not being guarded.

Then field lit up like someone had turned on the lights at Busch Stadium. Before we had time to register what was happening, a shot rang out. Then another. The shooter was so close to us, we could see the muzzle flash. We couldn’t understand how this was happening. They had obviously seen our campfire and knew the lights were on in our neighbor’s cabin. They were overly aggressive in their poaching, with no regard for the two homes within 100 yards of where they were shooting.

We took off down my hill to confront the poachers as they drove out of the field. They didn’t stop at our urging to do so, instead pulling a Dukes of Hazard like move to speed up around us and flee the hollow. We don’t know what they killed. We looked for deer and blood in the field but didn’t find anything. It’s a large field. We were all left speechless.

One of the guys in my camp, Nathan McLeod, said, “I don’t want to sound like a big softie, but it hurt my soul. I felt so bad for the deer, I couldn’t even hunt the next day. It just ruined the entire hunting experience for me. It’s like the deer don’t have a chance.”

The endless chasing with dogs, road hunting, and spot lighting after dark eliminates the normal defenses of deer. It makes it hard to want to pull the trigger on one legally, because you know the struggle they live with. For an ethical, dedicated hunter, who loves wildlife and works to improve habitat and further the ethical aspect of deer hunting, it’s heartbreaking to know what we are up against. Especially when they rub it right in your face.

Some of ignorant folks will say they don’t want non-locals hunting around there anyways, screwing with their outlaw way of life. Acts like this steal wildlife from all of us. These people weren’t poaching because they were hungry. They were driving a brand new pickup. Way nicer than any vehicle in our party. Three people in my camp came from Indiana. They each paid $265 for a non-resident deer license, and this is the experience they’ll take home. We bought groceries, gasoline, a motel room, bullets and more supplies locally. Our little camp injected thousands of dollars into the local economy. It makes me so sad to see how little that is valued.

If you face a situation like this, remember, Operation Game Thief allows you make reports anonymously. The number is 1-800-392-1111.

To hear much more about this disappointing experience, check out the most recent episode of the Driftwood Outdoors Podcast anywhere podcasts are streamed or click HERE

Pic: Gov. Parson recently signed into law a poaching bill that significantly raises fines for those convicted of illegally taking Missouri game species and other native wildlife. Hopefully, this will help with an ongoing problem. Credit: MDC