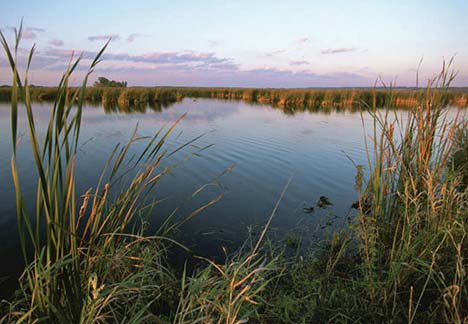 Being a waterfowl hunter, one comes to understand and appreciate the importance of wetlands. They are key to the health of waterfowl populations. Wetlands are home to much more than waterfowl, though. Approximately 40 percent of the world’s species live and breed in wetlands and about 200 new fish species are discovered in freshwater wetlands in each year. On Tuesday, Feb. 2, conservationists across the planet celebrate World Wetlands Day (WWD) to recognize the importance of these valuable ecosystems to people, wildlife and the planet.

Wetlands are critical to the overall wellbeing of our planet. They provide habitat for countless fish and wildlife species and help guard us against natural disasters like droughts and floods. World Wetlands Day provides helps to raise awareness about the importance of wetlands, and how the decline of wetlands and biodiversity can be addressed.

This year marks the 50th anniversary of the creation of World Wetlands Day. It began with signing of the Convention on Wetlands on Feb. 2, 1971, in Ramsar, Iran. Now the date is recognized as an opportunity for government agencies, non-governmental organizations, corporations and citizens to raise public awareness of wetland values. This year’s World Wetlands Day theme is “Wetlands and Water.”

“Ducks Unlimited’s mission is to conserve, restore and manage wetlands and associated habitats for North America’s waterfowl. These habitats also benefit other wildlife and people,” said Ducks Unlimited Chief Conservation Officer Karen Waldrop. “When you enjoy a refreshing glass of water on a hot summer day, wetlands likely helped make that water suitable for drinking. Scientists refer to wetlands as ‘nature’s kidneys’ because they filter and purify water as it passes through them.”

Worldwide, we use 10 billion tons of water every day. The majority, 70 percent, is used for food cultivation. Another 22 percent is consumed by industry and energy. Water use has increased six fold over the last 100 years and continues to rise by 1 percent annually. Yet, only 2.5 percent of the water on Earth is fresh water, and less than 1 percent of all fresh water is useable, since most of it is stored in glaciers, ice caps and underground aquifers. We need wetlands to purify and produce clean, fresh water.

“World Wetlands Day is an annual opportunity to make people aware of the threats wetlands face and how they are important to wildlife and people,” Waldrop said. “At Ducks Unlimited, we work for North America’s wetlands every day of the year. Without the support of great, conservation-minded partners our work would certainly be limited.”

According to World Wetlands Day materials, there are five key actions for saving our wetlands. Those are, 1. Stop destroying, start restoring wetlands. 2. Don’t dam rivers or over extract from aquifers 3. Address pollution, clean up freshwater sources 4. Increase water efficiency, use wetlands wisely 5.  Integrate water and wetlands into development plans and resource management.

Wetlands are a critical habitat across the planet. As a worldwide community, we need to do a better job of protecting or precious wetland resources. For more information about World Wetlands Day, visit www.worldwetlandsday.org.

Pic: Pic: Wetlands are critical to the health of our environment for people and wildlife.