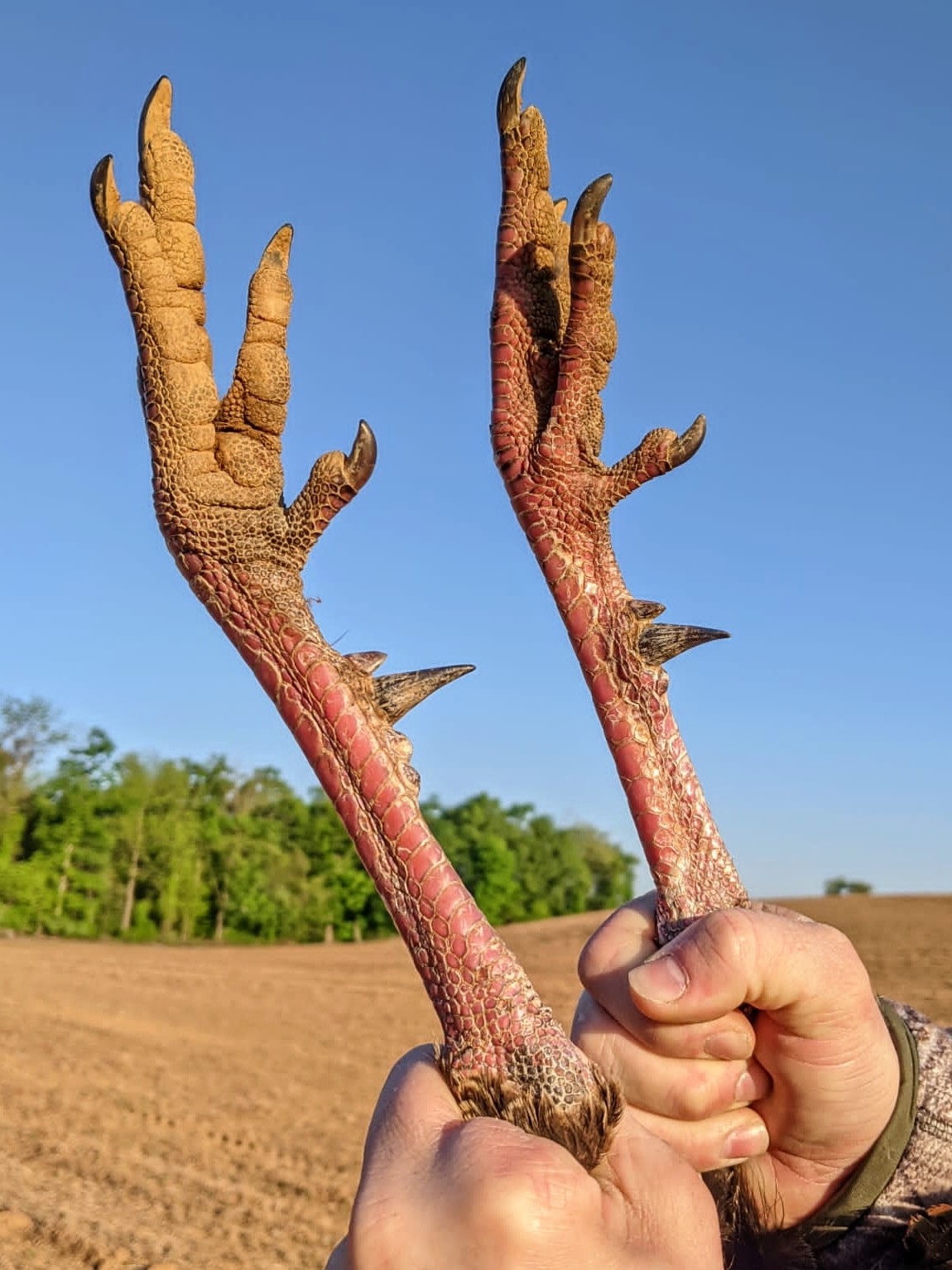 Montie Halteman made history with an interesting Pennsylvania turkey. After chasing this bird for three seasons, he finally put a plan together that led to his cousin, Kenton Halteman, wrapping a tag on the wise old gobbler. To their surprise, each leg hosted multiple spurs and it sported a double beard.

“I say it’s a seven spur turkey,” Monte said. “There’s four on the right leg and three on the left. Four of the spurs are real obvious. The rest compare to jake spurs. You can’t argue about six of them. The seventh is there, but not as distinct.”

After examining the photos, I think it maybe a little stretch to call some of the bumps on the back of this turkey’s legs spurs, but they are certainly a little strange. Whether or not you count the spurs, this is one heck of a bird. The gobbler sported a 10 ½ inch main beard and a six inch second beard,” Monte said. “The main beard is real thick. The second one is a about as big around as a regular wood pencil.”

Monte roosted the gobbler on Friday night, but when Saturday morning arrived, the old bird didn’t give them a single gobble from the roost. He was patient though, and was rewarded for his experienced play.

“Even though he wouldn’t gobble, I told Kenton he had to be there. Finally, we heard a hen yelp, so we knew turkeys were around. Then I heard him fly down. We’d set up about 80 yards from his roost,” Monte said.

Once the birds were on the ground, the duo moved up 30 yards to see the gobbler and three hens in a field. Monte said they used extreme caution as they slowly moved through the timber. This was an experienced bird and they knew the slightest movement would send him over the next ridge in a hurry. When Monte finally made it to a safe place to peer out into the field, he liked what he saw. The gobbler was in full strut. Monte and Kenton looped around about 125 yards and set up on the opposite field edge.

“Last year, he was out in the same field in full strut. His head was brilliant. Full of color. I yelped at him and he broke out of strut, his head lost all its color and he sprinted in the opposite direction. This year, I just let him come. At 35 yards, I called once. He broke out of strut and Kenton put him down,” Monte said.

Having history with an animal or fish can add to the excitement of finally finding success. I know many fly fisherman who have watch the same big trout lurking near the bottom of a deep pool for years, before finally hooking it. And deer hunters nowadays too often, in my opinion, name deer and watch them grow for seasons before taking them. Turkeys are a little different, though. There aren’t too many multi-year stories like this one, which culminated in a great hunt over numerous seasons.

The hunt took place near Newville, Pennsylvania. The seven spur bird is being full body mounted at Outback Imagery Taxidermy in York Springs.

Pic: The unique spurs of a special Pennsylvania gobbler.