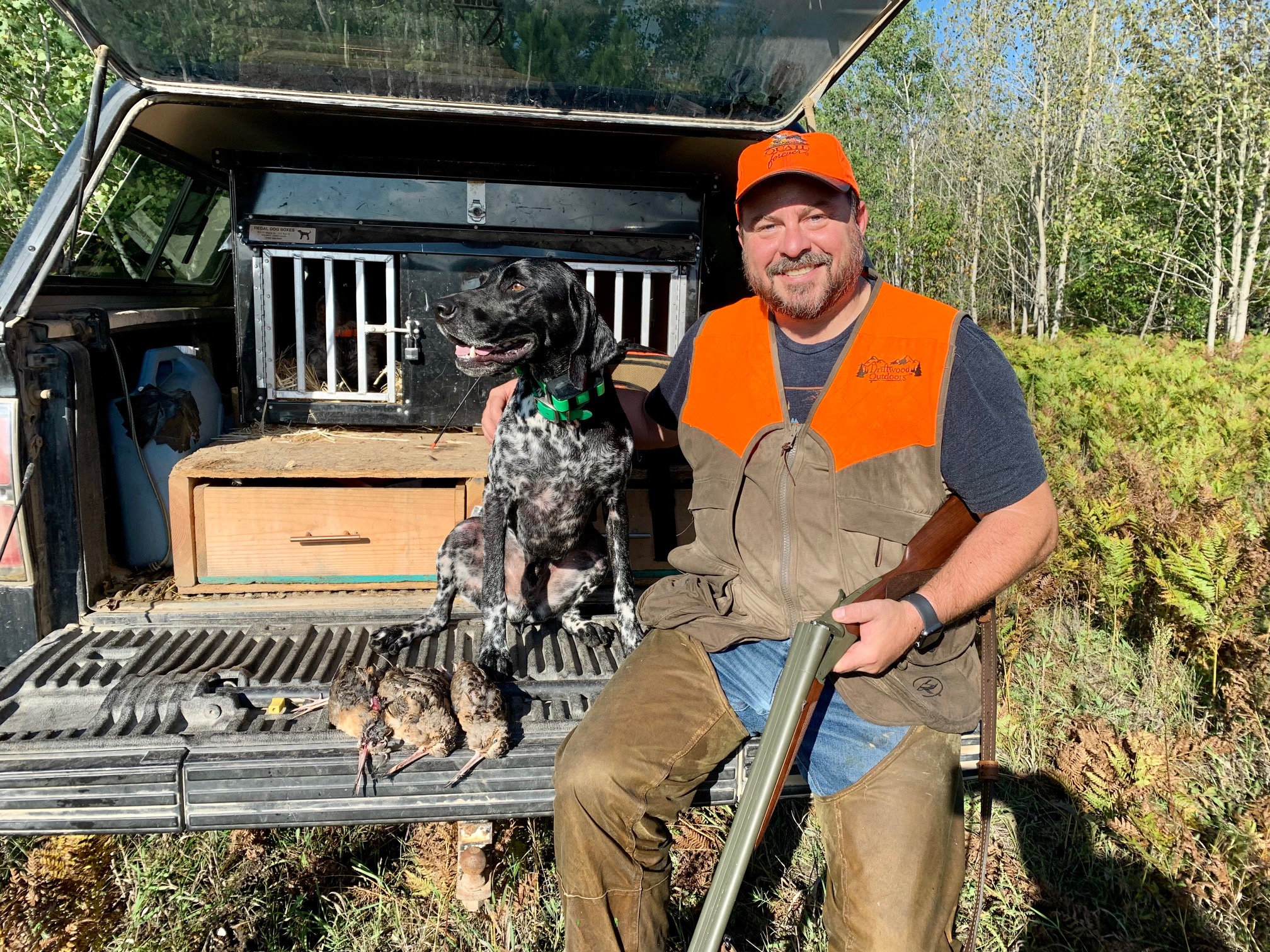 Nick Green is the public information officer for Michigan United Conservation Clubs and editor of Michigan Out-of-Doors magazine. We met at an Association of Great Lake Outdoor Writers Association (AGLOW) conference in Bismarck, North Dakota in September of 2019. If we are lucky, a few times in this life, we’ll collide with people who seem predestined to make this journey with us. Nick has quickly become a favorite person of mine. We re-connected last week in Gaylord, Michigan and I killed a limit of American Woodcock behind his incredible bird dogs.

Worm Burglars, as woodcock are affectionately known, are a migratory game bird that can make a trip from Canada to the Gulf of Mexico. They are hunted throughout the central portion of the United States and make excellent table fare. The rich, dark game meat of a woodcock may remind one of liver. When roasted with the skin on, drizzled in wine with mushrooms and onions, you’ll understand what royalty experiences in the dining room.

My first hunt with Nick was in North Dakota. We killed sharp-tailed grouse on the National Grasslands south of Medora. My goal was to hunt where Theodore Roosevelt had hunted. I wanted to walk, shotgun in hand, over the same grassland my hero had. We were successful in bagging five birds between us. I killed a limit of three. Nick bagged two. One of his high praise qualities is Nick doesn’t care I killed a limit and he didn’t. For him, the real value of the hunt was in the work of his dogs – Calvin and Summit.

I claim to be an uncle to these two canine hunting companions. I must admit, my sentimentalizes to dogs does not match Nick’s extreme level of affection. I’m a lab man. Labs are tougher than bird dogs. There is no question about it. Shotgun Willie, my 7-year old black lab, would destroy Nick’s dainty pointers in any manly challenge. However, Calvin and Summit serve an incredible purpose. They find and hold birds.

I watched Calvin hold a woodcock to point not 6-inches under his nose. How that dog did not clamp down on that bird with his jaws is beyond me. Willie does not have such discipline. He’s more like a football player at a frat party. You’re going to know he’s there.

What I like most about grouse and woodcock hunting in the north country of Michigan, Minnesota and Wisconsin is how you have to bust through cover. These birds live in new growth forest. So, you basically dive into small trees and ferns thicker than anything a Midwesterner could imagine and just plow forward. Back in the day, I was a linebacker on defense and fullback on offense. Moving forward aggressively in a straight line was the job. That’s also my personality. I struggle with sitting still for long stretches. I want to move. To experience progress. Hunting these forest birds gives me that.

I’ve not found a better place to pursue woodcock than Gaylord, Michigan. This is my second time to the alpine village at the “tip of the mitten” in as many years. Just south of the Mackinac Bridge, Gaylord is an outdoor paradise. Especially in fall. You just have to see it to believe it. I was in town for a work conference, for which I brought fly rods, golf clubs and a 20-gauge double barrel CZ-USA shotgun. I ran out of time to fish, but plan on telling you soon about catching salmon with Nick and Kevin Morlock on the Pere Marquette River on my way home.

Both times I’ve been up to Gaylord, I’ve stayed at Treetops Resort. This place is phenomenal. I played the Rick Smith Signature golf course and the famous par-3 course. These golf courses are so hilly, it feels like you’re riding a roller as you follow the cart path. I also ate fried lake perch. Few things in this life make me happier.

Pic: Brandon Butler with an opening day limit of woodcock near Gaylord, Michigan.