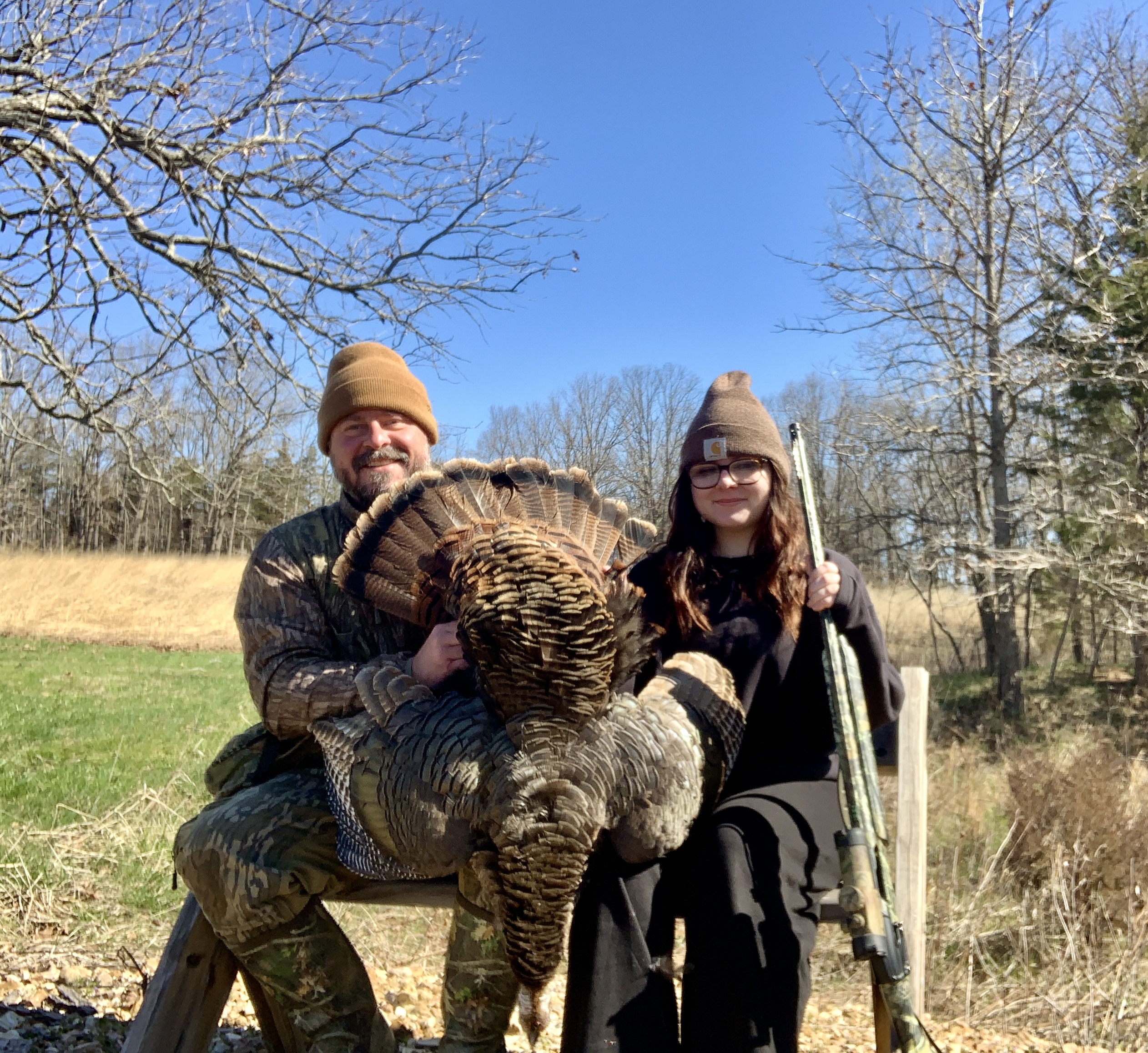 I’m a blessed father of two beautiful daughters. Both of whom are in the throes of their teenage years. They have a lot going on, so quality time with them is precious. Hanging with dad isn’t usually their top prospect for fun. Looking back, I was the same way at their age. That’s why it meant so much when my younger daughter, Annabel, asked if we could go turkey hunting during Missouri’s Youth Season.

My older daughter, Bailee, has killed two turkeys. The first when she was just 7-years old. I pushed too soon with her. Even though she was excited to go at that age and to take a bird, the recoil from her shotgun hurt her. She had only practiced with a recoil reducing shooting rest. I quickly realized I had made multiple mistakes while wiping tears off her cheeks. After that, I never pushed hunting on either of my girls again. I’d ask, but would accept their denial. Until Bailee came around and took her second turkey when she was 14.

It’s normal for parents to want their children to share a mutual love for pastimes and activities they enjoy. I have never held back from trying to introduce my passions to my daughters. I don’t believe I have treated them any differently than I would have treated a son. My girls have been exposed to the outdoors since they were first born. And while it is safe to say neither one of them is ate up with any specific outdoor activity, they both appreciate nature, love wildlife and understand the importance of conservation.

Annabel is kindhearted. As a freshman in high school, she will tell you she wants to go into marine biology and live by the ocean. I have this vision of her rehabbing sea turtles in an open air laboratory. It warms my heart. I am proud of and admire her compassion for animals. And I know it is confusing to some people, including her, that one can absolutely love animals yet hunt and kill them. Hearing someone just say it can leave one scratching their head thinking, you love animals but you kill them. That’s quite contradictory.

Given time, though, one can show how this is possible. I have purposefully tried to do just this with my daughters. While they see me hunting and returning home with deer, turkeys, ducks and other wild game species, they also see me and sometimes help me, preform habitat work to improve lands for wildlife. Not just the species we hunt. All the mammals, birds, insects, invertebrates, fish and aquatic species that live there. We plant trees and native plants. And we talk about climate change, the environment and our responsibility to do better by our planet.

When I bring home wild game the purpose is to eat it. I’ve heard the argument that people in this country no longer need to hunt for food. For the most part, this is true. But I want to hunt for food. Because for one, wild game meat is better than any protein I can go buy on a piece of Styrofoam wrapped in plastic, or frozen in a plastic bag. If you don’t know the richness of venison tenderloin, then you’ve missed one of life’s pleasures. My daughters have experienced the care we put into the meat from hunting. They grasp the benefits of the bounty.

This full circle effect of participation in habitat activities of ecological and wildlife benefit, and then nourishing one’s body with life sustained from those habitats, brings a level of understanding non-participants will never grasp. Understanding the beginning and end of this lifecycle, I believe helped Annabel, at age 15, finally decide she wanted to go turkey hunting with me. She knew this was her last chance to hunt a youth season, and she said she wanted to. I was surprised and very happy. I never pushed her. She came to the decision on her own.

We were blessed to be invited to hunt with State Representative Bruce Sassmann and his wonderful wife, Jan. They own a beautiful farm in Osage County where they have undertaken a substantial conservation plan. Also impressive are a couple of structures they built for their Legends of Conservation program. Onsite is a replica of Aldo Leopold’s “Shack” and Henry David Thoreau’s cabin at Walden Pond. Annabel had previously been to the Sassmann’s to watch conservation reenactors portray Leopold and Thoreau, along with Theodore Roosevelt and John Muir. She was excited to return there to hunt.

It was cold on opening morning of the youth season here in Missouri. After about an hour of suffering, Annabel hiked over to Thoreau’s cabin and borrowed a blanket from the bed. Now toasty in the blind, we settled in for a spectacular show that included a dozen hens and one big, gorgeous gobbler who was spitting and drumming and spinning in circles all fanned out, but wouldn’t come within shooting distance. But a bearded hen did, and Anna was not going to be picky. With a perfect shot, she took her first bird.

After abundant adulation back at the Sassmann’s barn, I cleaned the turkey and we headed for home. Annabel quickly fell asleep in the passenger seat as I reconciled all the emotions. Bailee was pretty shocked that sweet little Annabel shot a turkey. That night, we ate grilled wild turkey, fresh never frozen, with salad and French fries. An incredible meal you’ll never find on a restaurant menu.

I’m proud of Annabel for going hunting because it took a long time for her to work up the desire. I feel like she came to it honestly and on her own accord. She’ll probably never be someone who hunts all the time, but she’s done it, said she’ll likely do it again. She has completed the circle.

Pic: Proud father, Brandon Butler, with his daughter Annabel and her first turkey take during the Missouri Youth Season.