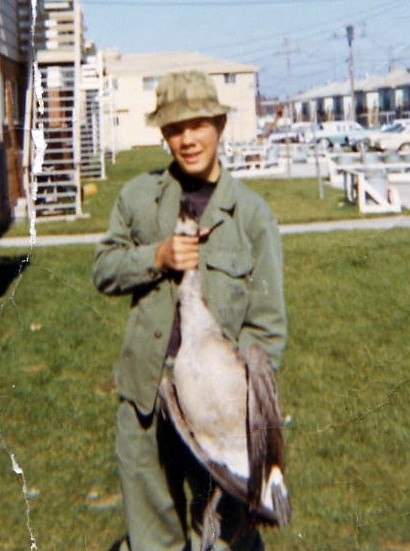 A story written thousands of times. Sometimes for the reader, often for the writer. Every hunter occasionally dips their cup into a barrel of well fermented memories looking for one more intoxicating sip, and in the fog of aging recollections, they ground-truth the result of their experiences.

Hunting was not an obvious part of my environment growing up. No one in the immediate family did it. None of my friends were hunters. There was no rite of passage or passing of the torch from grandpa to dad to me. That wasn’t my family. Untimely deaths, an urban upbringing and apartment living defined a world that barely included nature and certainly didn’t emphasize it. However, like all things, there was a beginning; a catalyst and reaction. And many years later, it’s hard to imagine not hunting. It’s part of who I am, and years are measured by hunting seasons not by birthdays, and frankly, I’m running out of both.

Over time, many influences would nudge me toward a lifetime friendship with camo, shotguns, and wildlife. But my initial introductions were the epiphany. Far from the street corner bus stops and pinball machines of the neighborhood, two people and one place in particular ultimately served as the transforming agents.

In the autumn of 1965, my cousin, Stan and his friend invited me to tag along on a duck hunt. The destination was Horicon Marsh, a magnificent 30,000-acre wetland in Southeastern Wisconsin. Too young to hunt, I could only observe but the experience made a deep impression. An escape from city noise and concrete to places unknown. Nature. Hunting. Shotguns. Adventure.

Accoutrements included borrowed oversized waders, a pair of warmish socks, and PBJ sandwiches. The two-hour journey was memorable. Gear and three people crammed into a sportscar traveling the highway in the middle of the night. The banter of young men. Stories, humor, and questionable wisdom of boys in their early twenties. I was given access to a private club, and some conversation most unsuitable for the dinner table back home.

Arriving at Horicon near a place called Burnett’s Ditch, we unloaded gear and dressed for the day. A Rayovac flashlight in hand, a trail, then a muddy path led us into the dark marsh. For this city kid it was surreal. Stepping into murky water, a crossing at the ditch, uncertainty and some fear. Too deep for me to wade, the “men” hoisted me up, over and through the ditch to the other side. The path faded and soon we hunkered down before daybreak on a wooded rise above the marsh for hours of hopeful pass-shooting. We built a blind of branches and brush.

Thinking back, it’s clear these lads didn’t know much about duck hunting, and while only a couple ducks fell that day, what I saw was nothing like anything seen before in my young life. Thousands of ducks and geese, a grand marsh, and a comradery between young men. At the end of the day, we stopped at a nearby tavern for bowls of chili. A wide window view of corn fields, flocks of geese on the ground, skein after skein cutting through the sky. And on this one day, by this one experience, an eternal flame would be kindled.

Two years later now old enough to hunt on my own, the geese called to me. An article in the Milwaukee Journal announced goose quotas and how to apply for a prized Wisconsin goose tag. I mailed my application and some weeks later learned I was successful. My challenge now was finding someone willing to give time to an aspiring goose hunter. With youthful enthusiasm and a brand-new hunting license neatly folded inside my wallet, I asked my cousin for a return trip to the marsh but was rebuffed. For him, waterfowl hunting didn’t stick; he moved on to other things. City things.

Smitty, last name long forgotten, was a big, gentle man with a smile and sense of humor. A family acquaintance of some sort, he was a hunter and fisherman. I remember fishing poles always in the rear of his station wagon, and him wearing a red and black plaid Mackinaw coat during the winter. He would delight me with stories, and while the extent of his actual knowledge and experience is unknown to me today, he knew more of these things than any family member or friend. To me, he was an outdoorsman. I told him of my successful goose tag application, and for whatever his reason, however it happened, he offered to guide my quest.

Again, an early morning departure with lunches packed and my single-shot, 16-gauge Stevens shotgun in tow. I wore green military fatigues, given to me by a neighbor and altered by my grandmother to fit properly, and my very own camouflage hunting cap purchased in the sporting goods department of a nearby Montgomery Ward store.

We would hunt from a rented blind on farm property. In those days, many farms near the marsh posted handmade signs – Goose Blinds for Rent. A knock on a farmer’s door, payment in cash, and we were off to our designated hunting spot. We rented the blind for the morning; another hunter would occupy the spot in the afternoon.

Arriving after sunrise, we readied ourselves for the morning flight. In the distance we could hear the birds as they approached; thousands of geese making their noisy morning journey from refuge to feeding grounds. As chevrons cut through the sky, I waited for low fliers I might touch with my single-shot, occasionally shooting, only to miss and annoy my target.

As the morning ticked away, I eventually prevailed and my first goose fell, landing with a hard thump in front of the blind. Still alive, I chased down this large feathered creature grabbing it by its long neck. I never held a wild, still very lively goose in my hand before, but there I was, proudly walking my prey back to my grinning hunting partner. Once back in the blind, I was instructed on how to dispatch my goose, we talked about the kill, ate our lunch, and headed to the car for the trip home. A big goose slung over my shoulder I remember feeling a sense of accomplishment. On the walk back to the big station wagon, we met the blind’s next occupant. We stopped to talk, and I told my first hunting story to another member of my new fraternity.

The lesson of this story is simple. Want to create a hunter, a conservationist, an outdoor enthusiast? Show a child the possibilities. Show them what exists. Show them how they might fit in. Lead them down the trail and lift them over and through the ditch to the other side. Many seasons have passed since these simple beginnings and I’m awed by how deeply the first moments afield touched me. Gradually, many other experiences would round out my attachment to hunting, but all of it started when Stan and Smitty simply took a city kid hunting.