Completion of Turkey World Slam about People and Places 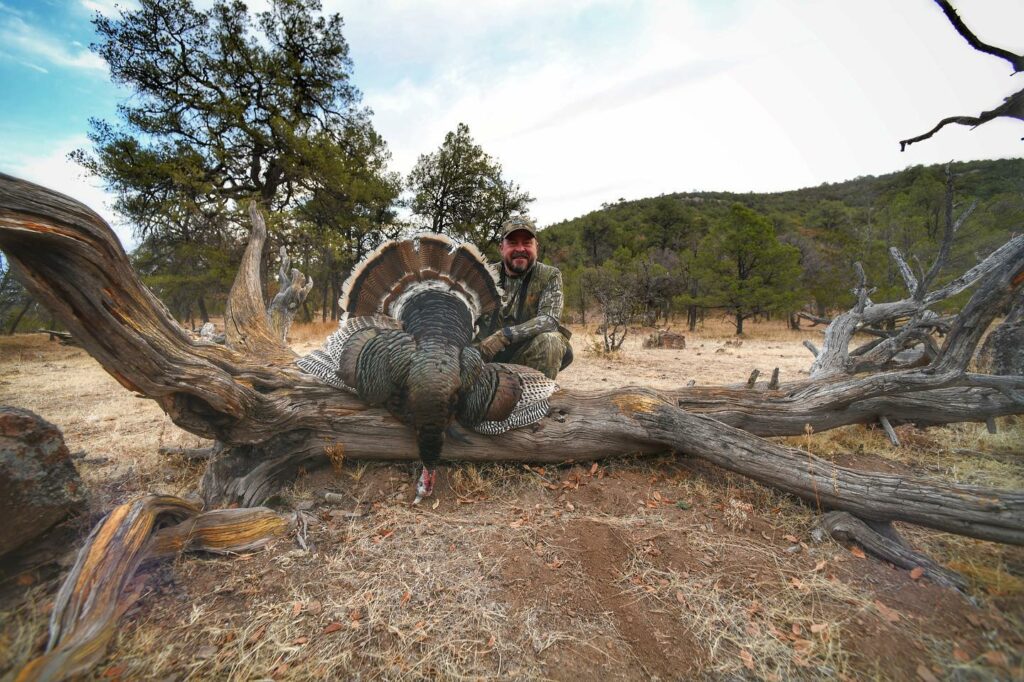 The first time I ever saw wild turkeys, I was sitting in a deer stand on a crisp fall afternoon near Roselawn, Indiana. As the sound of leaves crunching grew louder and louder, I envisioned a large white-tailed buck making his way towards me. When a string of hens emerged instead, walking single file on a trail atop a ditch bank, my life changed forever. There was no hunting season for turkeys yet, but just to see them was magnificent.

Turkeys had been extirpated from Indiana and much of the eastern half of the country early in the 1900s. Through combined efforts of government agencies, the National Wild Turkey Federation and concerned citizens, turkeys were restored to their native ranges, and beyond. Today, there are turkey hunting seasons in 49 states, with Alaska being the only state void of wild turkeys.

There are six species of turkey in North America. They are the Eastern, Osceola, Rio Grande, Merriam’s, Gould’s and Ocellated. If a hunter takes all six of them, they have completed a World Slam. I finished mine May 4, 2022 in the mountains of Chihuahua, Mexico. I was hunting with El Halcon Outfitters.

The first turkey I ever killed was a Merriam’s hen in Montana. At the time, I knew very little about turkey hunting. I was driving through a rural part of the state, when I spotted a flock of turkeys in a pasture. This was back in the day when a knock on a door would likely lead to hunting permission. I asked and was granted the opportunity to try and take one of those birds. I was able to do so by setting up in an ambush spot and waiting for them to walk by. Not the traditional, or most exciting way to take a turkey, but effective none the less.

Not long after, I moved back to Indiana. This time settling in the southern part of the state near Bloomington, where turkeys are plentiful. The first two years I was there, I killed bearded turkeys by again employing my deer hunting skills of a concealed ambush. The first was a double-bearded jake. The following year, my cousin, Derek Butler, and I doubled on a pair of mature gobblers working their way to roost in the evening. This was my first longbeard.

It wasn’t until 2009 when I called my first turkey. I had set up a blind along a creek at the base of a big hill. After staking a lone hen decoy out in a picked corn field, I crawled into my fabric hut and waited for sunrise. A few yelps on my box call were returned by a series of gobbles just up the hill above me. It wasn’t long before a mature gobbler flew right over the top of me and landed mere feet from my decoy. I wasted no time taking him. I can point my finger at that exact moment and say this is when my turkey hunting obsession began.

After that hunt, I spent the next few years racking up more Easterns. I moved to Missouri in 2010 and found a whole new level of turkey hunting involvement. Hunters in the Show-Me State pride themselves on turkeys more than anything. Sure, deer and ducks have legions of hardcore hunters, and many more deer are killed each year than turkeys, but I believe, turkeys are what we obsess over most here. I’ve killed birds from the Iowa border and throughout the Ozarks. It’s special across the state. A camp with legendary turkey hunter Ray Eye on the Big Piney River resulted in my favorite Missouri bird.

A trip to Deadwood, South Dakota in 2014 resulted in my first Merriam’s gobbler. Then the greatest hunting trip of my life took me to the Yucatan Peninsula in 2015, where I successfully hunted the jungle for an Ocellated with Bill Cooper. This was the point when I first thought I might complete the World Slam.

The next bird I added to the list was a Rio Grande. I hunted with my great friend and renowned wildlife photographer Russell Graves. We made short work of the turkey hunt and spent most of our time exploring rural, north Texas. I don’t know anyone more proud of where they come from than Russell is about being from Texas.

In 2020, just as the world was shutting down at the beginning of the COVID pandemic, I slipped into Florida and killed an Osceola with my uncle near Okeechobee. I made it out of the state on one of the last flights from Fort Myers before they closed the airport down. It’s strange to reminisce on how empty the place was, given how every plane is again packed these days.

The Gould’s was all I had left when this season started and I couldn’t have filled it in any grander fashion. Flying into Chihuahua City and spending a day exploring this non-tourist destination set the stage for an adventure in Old Mexico. There were no resorts where we went. This was an authentic international experience. The outfitter I was with, El Halcon, couldn’t have been better. The lodging and food were excellent, and hunting, well it only took 10-minutes on the first morning to finish my World Slam. To hear a whole lot more about it, check out the recent World Slam episode of the Driftwood outdoors podcast.

All along the way, this journey has been about the people and places who joined me on this quest to fully experience the wild turkeys of North America. In no way is the killing of these birds the epitome of why this slam matters. It’s the knowing of the Yucatan jungle, the forests of the Ozarks, the Panhandle of Texas, the swaps of the everglades and the Badlands of South Dakota. It’s family and friends in photographs with smiles stretched across their faces. It’s the campfires shared, the miles logged, the bread broken and the memories of great times with great people in God’s creation. That’s what matters. That’s why this quest was worthy.

Pic: Brandon Butler with the Gould’s Turkey from Mexico that completed his World Slam. 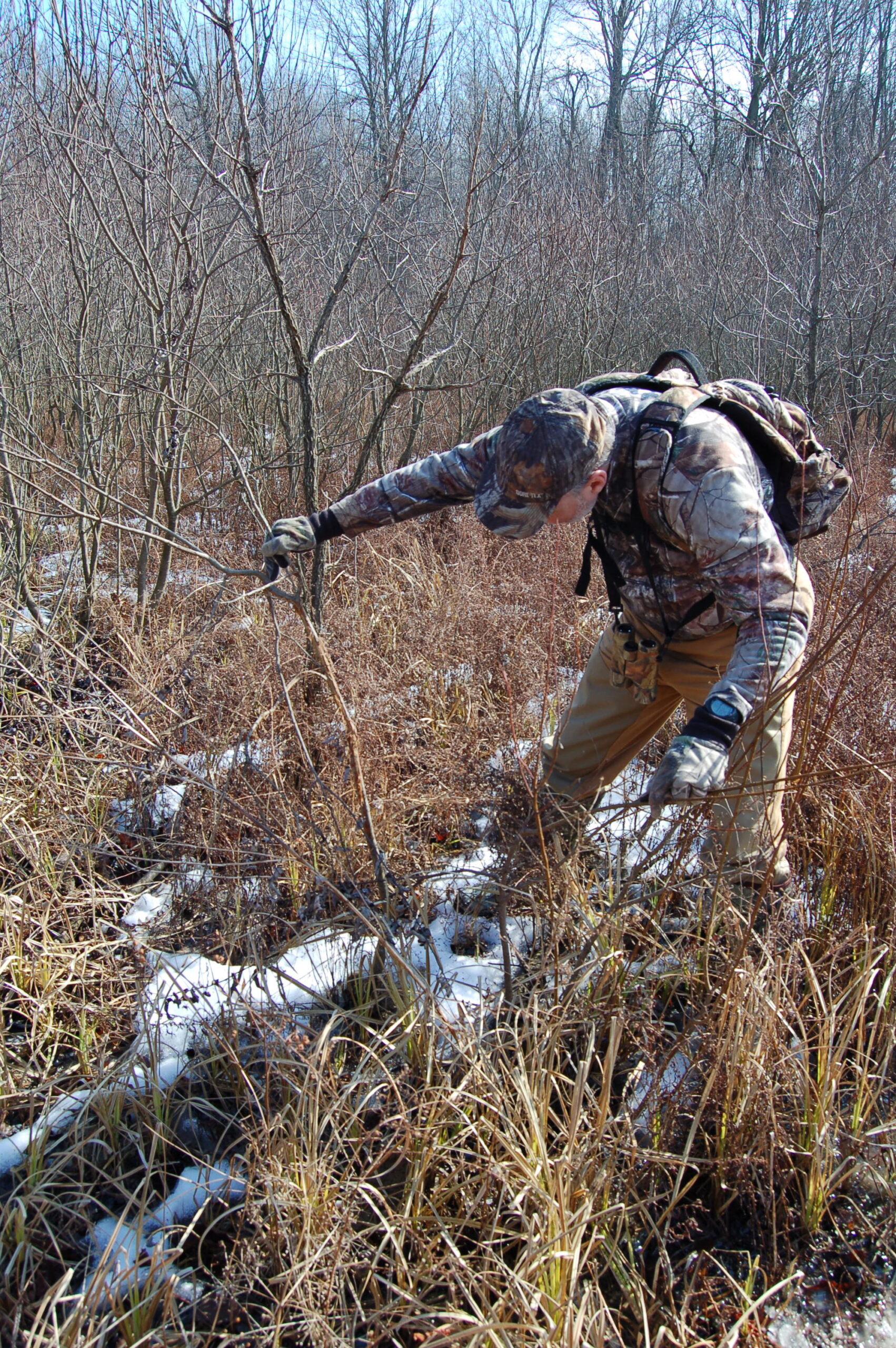