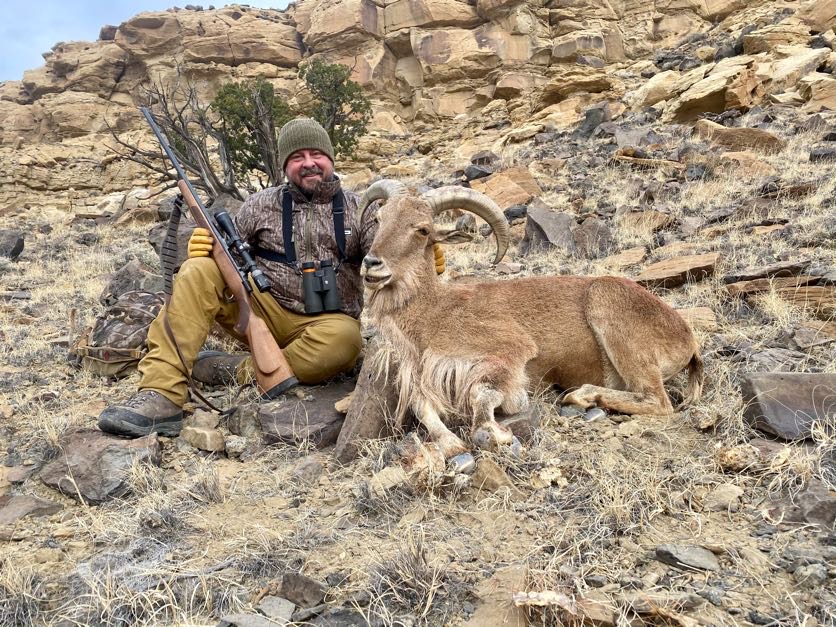 Every once in a while, Lady Luck lays her hand on your shoulder and serves up an unexpected success. Such was the case for me on a recent aoudad hunt in New Mexico with my good friend, Jesse Duebel, the executive director of the New Mexico Wildlife Federation.

Aoudad, which are actually Barbary sheep, are native to North Africa. They survive where other species can’t, in some of the roughest, rockiest, harshest environments on our planet. Much like West Texas and parts of New Mexico, where they were introduced as a hunting species on private property around 1900, but have long since spread onto public lands.

These sandy-brown sheep weigh up to 300 pounds, but can get by without liquid water. They actually obtain their water through food. So you can’t count on hunting them at waterholes, making the pursuit very challenging in some of the most desolate locales you can find a living creature.

New Mexico offers over-the-counter, free range licenses for aoudad that are good for 365 days a year. Meaning, there is no closed season. Even with this much opportunity, Jesse told me the success rate on these tags hovers around 5 percent. That puts into perspective how though this hunt actually is.

Wanting to see the country and spend time with Jesse was enough for me to spend the nearly $500 in license fees it costs to hunt an aoudad as a non-resident. However, this trip also afforded me the opportunity to meet with United States Senator Martin Heinrich to discuss renewable energy. Senator Heinrich is a Missouri native and fellow graduate of the University of Missouri. He’s also a dedicated conservationist and hunter, who cares deeply about ecology and wildlife. So the aoudad hunt was on.

Jesse rented us a house in the middle of nowhere about an hour and a half from Albuquerque. From the back porch, the views of the mountains were stunning. But just looking at the sheer cliffs made my legs hurt. I knew we were going to have to hike dozens of miles to just hopefully see a sheep, let alone kill one.

On the first morning, two miles into our hike, we found a lone aoudad on the side of a mountain and it was a good one. Jesse couldn’t believe it. By observing the loner, we quickly realized it was injured. It had a broken leg. Instead of taking a long shot, I climbed the mountain and closed the distance to about 20 yards. Before the sun was even overhead, my longshot of a hunt was finished. And I saved the creature from a painful and gruesome death at the hands of a predator.

Fred Bear once said sheep meat was his favorite. I’d never had it before. But after we cooked fresh Barbary sheep backstrap that night, I now understand. It’s fabulous. I have shared this harvest with a number of friends who have never tasted it before, and every one of them has loved it.

I asked Jesse to expound on aoudad hunting in New Mexico. Here are a few questions and his answers about this special species.

Less than 1 percent of all hunters in the United States will ever have the opportunity to pursue a wild, free-ranging, bighorn sheep. That experience is highly coveted. Although not native to New Mexico, the extremely cagey and resilient wild sheep from the Barbary Coast of Africa are every bit as challenging to hunt as the native Rocky Mountain or Desert Bighorn Sheep that call New Mexico home.

Aoudad inhabit very remote and rugged terrain on public land in New Mexico. Often referred to as a “working man’s sheep hunt” the opportunity to hunt these beautiful, resilient and elusive creatures is available to anybody with the intestinal fortitude to accept the challenge.

I don’t consider them invasive as they didn’t invade our landscape. They are certainly non-native. I refer to them as exotic, because they were purposely brought to this area. In the same way brown trout our stocked on our rivers. The word invasive is a bit unfair in my opinion. Yet, I do recognize the potential of these animals having a negative impact on native species.

I support the recovery and enhancement of our native sheep populations as a great priority, and hunt aoudad in areas where native sheep are not present. Even so, it is probable that aoudad could have an adverse impact on other native wildlife such as mule deer. But from my personal observations, I would suggest that the aoudad I pursue are inhabiting terrain that mule deer would consider inhospitable.

I am not a wildlife biologist. I trust the experts at the New Mexico Department of Game and Fish to make the appropriate decisions. Considering the tags for these sheep where I hunt them are unlimited and sold over-the-counter, I would suggest the department is doing a great job of managing the population. The fact that they are often referred to as unicorns suggests that their population is not growing to a damaging size.

Aoudad are very nomadic. Hunters can effectively scout for many species and identify areas that hold huntable populations. In my experience, aoudad are not a species that can be patterned with any degree of predictability. It’s often said, “These animals are where you find them.”

Aoudad are colored in such a way that they are impeccably matched to the landscape in which they live. They truly are the mammalian version of chameleons as they disappear in their habitat. Their eyesight could be compared to that of a pronghorn, but they have the advantage of living on strategically elevated vantage points. Couple all of this information with the fact that they are hunted 365 days a year, by anybody and everybody willing to purchase an over-the-counter tag and it’s easy to recognize why this hunt is one of the most challenging in all of North America.