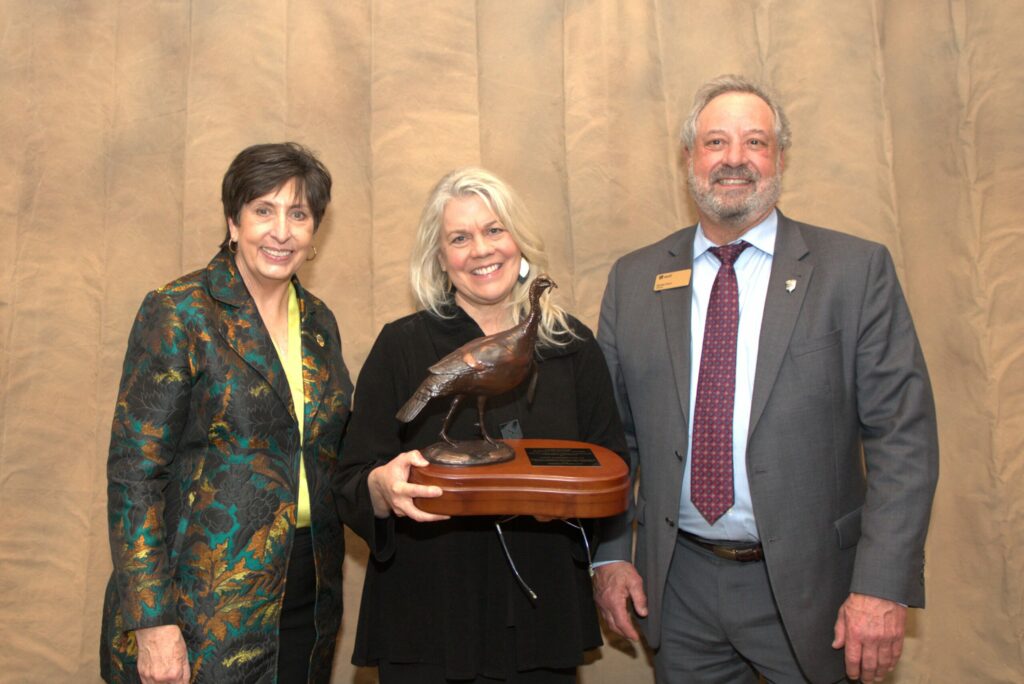 A couple of weeks ago, I attended the National Wild Turkey Federation’s (NWFT) annual convention in Nashville, Tennessee. It was the first consumer show I’ve been to in a couple of years. As soon as I stepped through the doors, I was reminded of how much I love sport shows. Rows and rows of booths filled with like-minded sportsmen selling hunts and gear. I peruse them all. Walking the aisles chewing on jerky and stuffing brochures into a bag just like I did as a kid.

Turkey hunting has become one of my absolute top passions. I think a lot of it has to do with the fact that wild turkeys didn’t exist in Northern Indiana while I was growing up. It’s a species I have been able to watch return to the landscape. Now I’ve spent a couple of decades coming to know these birds intimately through untold hours of hunting and habitat work. Hearing the gobble of wild turkey fills me with hope, because it symbolizes our ability to right wrongs in this country.

There are a lot of partners to thank for the restoration of the wild turkey across much of North America. The dedicated employees of state and federal agencies played a huge role, as did many, many private land owners. But I think it is safe to say, we wouldn’t be here today if not for the bold work of the NWTF. At its peak, the organization swelled to a half-million members. Their dues and volunteer spirit returned the wild turkey to the forests from which it had disappeared.

Some of those NWTF members have served turkeys professionally. Some even spent entire careers working on turkeys. But only few have made a life serving turkeys and conservation. Where work and play all wrap into one. The National Wild Turkey Federation recognized one such individual at their convention this year when they awarded Sara Parker Pauley, director of the Missouri Department of Conservation, with the Lynn Boykin Hunting Heritage Award for her contributions to conservation and the preservation of our hunting heritage.

“As someone who has spent my entire career championing the conservation mission, including as a former NWTF employee, it is truly an honor to be recognized for the Lynn Boykin Hunting Heritage Award,” said Pauley, who was an NWTF Women in the Outdoors regional coordinator from 1999-2000. “She was a role model to women conservation leaders and her legacy of furthering the hunting heritage in this country has made a lasting impact. It’s a humbling experience to be recognized by NWTF — an organization I care so deeply about — and I will do my best to keep shining the light on this important conservation work we continue to work on together.”

According to the NWTF, the Lynn Boykin Hunting Heritage Award’s namesake was a former president and chairperson of the NWTF’s National Board of Directors. During her tenure, she emphasized the importance of hunting heritage and helped create a new outlook for the organization. Today, the NWTF’s mission to celebrate and preserve North America’s hunting heritage is some of its most important work.

Pauley and Boykin are kindred spirits. Both devoted their life to working for the advancement of our nation’s outdoors traditions. Pauley is the ninth director of the Missouri Department of Conservation since its inception in 1937 and the agency’s first female director. She is also a former president of the Association of Fish and Wildlife Agencies.

“We are especially thankful for Sara’s service to Missouri’s great conservation story and her leadership as director,” NWTF CEO Becky Humphries said. “Her determination to diversify the outdoors and make America’s conservation story inclusive of people of all walks of life has earned her the prestigious Lynn Boykin Award.”

Pauley is native of Columbia, Missouri, and still makes her home in rural Boone County with her husband, Scott. Prior to becoming the director of the MDC, she served as director of the Missouri Department of Natural Resources from 2011-16. Making her one of the most qualified natural resources professionals in the country. But ask her why she does her job, and she’ll tell you the truth – she has a deep passion for the outdoors. When it comes to her accomplishments as a turkey hunter, well, let’s just say she is in an elite class.

On a personal note, I am fortunate to know Pauley. She is a friend, a mentor, a leader I’m proud to follow and the finest example of a public servant you’ll ever find. Yet, what means the most about Pauley to me is the example she sets for all young women. As the father of two teenage girls, I’m thankful there are women like her blazing trails for females in the conservation and natural resources world. She sets a shining example for my daughters and all young women with outdoors aspirations.

Congratulations, Sara, on a well-deserved award. Thank you for all you do for conservation.