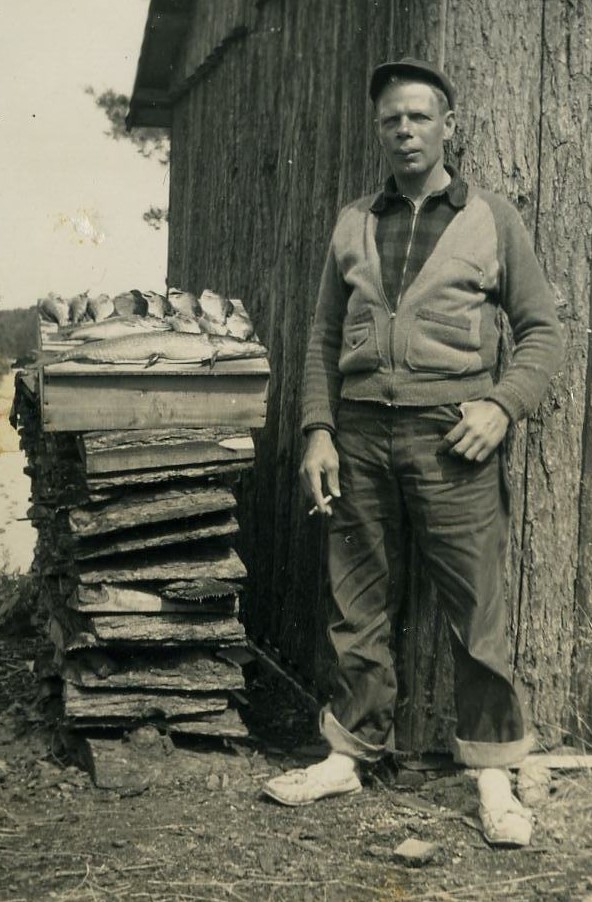 On September 13, 1957 Reinhold Alfred Edquist died. I was there and saw it happen, suddenly. As I sat at the kitchen counter, I watched my grandfather walk into the bathroom and collapse in front of a door that led to the attic. I remember his eyes wide open in a death stare as he lay on the floor. I was three and a half years old and this is my only certain memory of the man others called Swede. He was 55 years old. I never got to know him.

Growing up, my grandmother would tell me stories. I learned Swede liked hunting and fishing, and a cabin in northern Wisconsin at Rhinelander was an important sanctuary for him and other family members. In my youth, I would visit the cabin a couple times, no longer owned by the family. And it was here I found a piece of his spirit.

The old cabin became part of Vandermoon’s Rustic Resort. A collection of three vertical log structures, a main residence, two outhouses, and a pump house. Millie, the widow of my grandmother’s brother, and her husband Clarence, now owned and operated the old fishing camp which sat in a back cove off the Wisconsin River.

Aunt Millie was a short, round lady with a raspy voice and laugh, a product of too many cigarettes. She also became my fishing partner. After supper, we would meet at the old dock and load our gear into one of the wooden row boats. Wearing a straw hat, she would step down into the boat, awkwardly maneuvering to the back through the poles and seat cushions. I would take position in the center for rowing duties. On those evenings, we would fish until dark. I would cast for bass and pike and Millie with her long cane pole, would pull bluegills, perch, and bullheads from around the lily pads. And when we fished, we talked and she would tell stories about Swede’s love for Rhinelander, the cabin, and his exploits as a fisherman.

During the day, enriched by those stories, I explored every inch of that small camp. I would sit in Swede’s wooden, round bottom row boat wondering if the leak could be fixed. I walked his footsteps around the cabin. I stood on the old wooden dock where he likely stood for a morning smoke, looking for a reason not to fish and finding none. I stood in the old pump house and gripped the same pump handle he did, working it to fill a granite ware pail with water for cabin use. And took in the same scent of nearby white pines as he once did. A smell that still provokes emotion inside me.

Ten years past his death, I started to realize the loss of a man I did not know and through the eyes and curiosity of a young boy, began to build my own memories. As decades passed, I assembled a few more stories and relics. The passing of my grandmother would mean coming into possession of an old wooden whatnot box and cribbage board, both handmade by Swede. I still have a few pictures, a hunting knife, and a couple old tools.

Later, my mother would pass along two more important artifacts further painting a picture of Reinhold and his passion for hunting and fishing. The first is a picture of him at the cabin in Rhinelander, wearing camp attire and standing next to a wood pile, his catch of the day on display. The picture is a rich example of the times and it sits on my desk where I see it every day. The second artifact is a pair of Migratory Bird Hunting Stamps from 1935 and 1936, his signature across the front. Evidence that Swede was a waterfowl hunter, something I had never heard mentioned in any of the stories. The degree to which he hunted waterfowl is unknown to me, but it is nice to know this activity may have been another piece of this man’s life and a common but unrealized connection between the two of us. So, other than a few more stories and artifacts, that’s all there is of our acquaintance.

When it comes to life and living, they say you should just play the hand you’re dealt, and that’s what I’ve done. I didn’t have many mentors, just a few distant role models and second-hand stories. Mostly on my own initiative, I became a lifelong angler and hunter and later would choose wildlife conservation as a career. I know these achievements in some small ways were born at a tiny spot off the Wisconsin River in Rhinelander. And as his grandson, I think Swede would’ve been proud. But I can’t help to think if I could’ve shared time in the old row boat with him, the smell of white pines in the air and fishing poles in hand, the stories would’ve been better, the memories real, and we both would’ve been a better people for it.