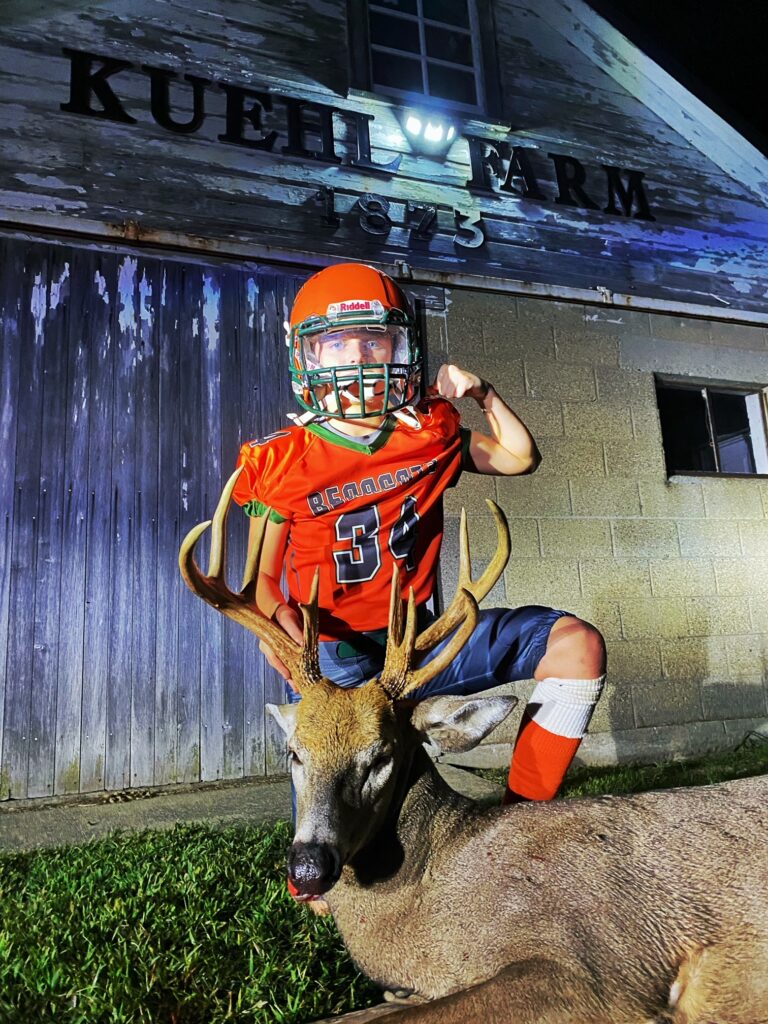 Conor Kuehl made a dangerous play. He shot his dad’s target buck. The 12-year-old athlete, who has been busy as a quarterback this fall, is used to making quick decisions under pressure. So when the buck the family called “Oscar”, because of all the trash on his left side, gave Conor a shot, he took it and made it count.

Greg Kuehl, Conor’s father, recently purchased a 102-acre farm near Valparaiso, Indiana that has been in his family for 5 generations. He’s proud of the fact his boys, Conor and Keegan, will be the 6th generation owners of the property. Greg is relatively new to deer hunting, and is having the time of his life hunting with his boys on their special piece of ground.

As the learning curve of being an adult onset hunter is figured out, Greg is doing all he can to share the experience with his sons and extended family. Keegan has also taken a buck off the property.

On Saturday evening of Indiana’s youth deer season, which was September 24 and 25, Conor had a football game. Greg is the coach. After the game, Greg asked Conor if he wanted to hunt, even though they didn’t have time to change into their hunting clothes. Conor said yes, and they had just enough time to slip into a blind the boys had helped build from an old gravity wagon before the sun started setting. Still wearing his football uniform Conor settled in with his and scoped 30-30 rifle to watch over an active food plot. He didn’t have to wait long.

A few does entered the food plot first, followed by two young bucks. Soon after, Oscar made his appearance. Being the dominant buck around, he wasn’t going to allow immature bucks a chance at the does. Conor said the mature buck came into the field and ran off the smaller bucks. He cleared the competition, then started to leave with the does. This is when Conor connected with a perfect shot.

They knew it was a good buck, but they didn’t know it was Oscar. Greg said it was his cousin who first proclaimed, “Conor shot your deer.” When they approached the downed buck, the distinguishing trashy left antler was hidden in the food plot. There were a few jokes about shooting dad’s deer, but of course, Greg was happy for his son.

There is a really good lesson here about deer “ownership.” Thankfully, no one owns the deer roaming wild in North America. Our special model of wildlife conservation has seven principles, the first states, “Wildlife resources are conserved and held in trust for all citizens.” Meaning just because a deer is on your property, doesn’t make it your deer. There are quite a few hunters out there who need to let that sink in.

Youth deer seasons will take place across the Midwest this fall. Many have yet to happen. These are special opportunities to introduce kids to hunting and hopefully hook them for life. Like Greg, you may lose your target buck to a youth hunter. I hope also like Greg, you are more than willing and genuinely happy to do so.

Pic: Conor Kuehl made a great play on a buck the family knew well.