A Tyro and the River of Presidents 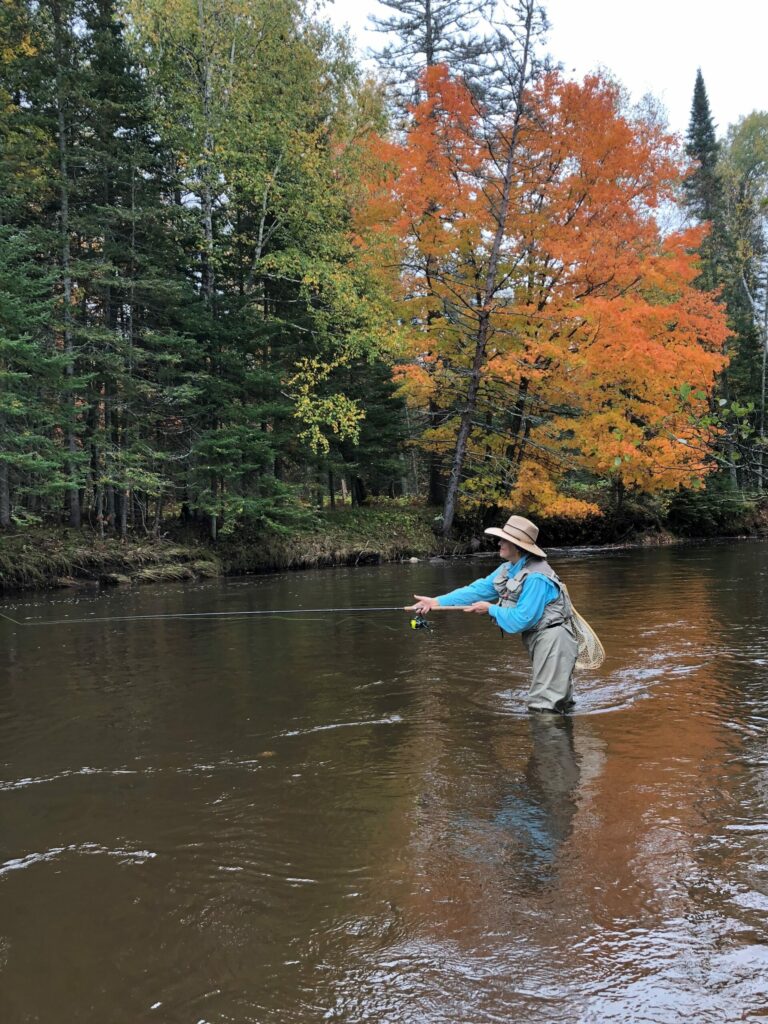 The sign said Angler Parking. There were seven vehicles in the Pine Tree lot when we arrived. License plates said Wisconsin and Minnesota. Missouri was now part of the group. Montana would join us later.

Three fishermen removed waders and stored their gear. The early morning crew was finished. No steelhead were taken, but everyone was smiling.

Inside a nearby van, a silhouette could be seen. A fly rod leaning against the outside. A fisherman’s vest and net hung from the mirror. A door mat just outside the sliding side door.

After several years of procrastination, I had finally made time to see the Bois Brule. Like the pretty girl who flashed a smile from across the room, far away. She got my attention a long time ago, but it was seemly impossible to meet her. A long 13-hour drive, lodging logistics and other weak excuses kept me away from that first kiss.

I heard of the river decades ago, probably in a history class. Known as the River of Presidents, Grant, Coolidge, Hoover, Cleveland, and Eisenhower have all been there. Coolidge setup a summer White House in 1928, spending three months mostly fishing and canoeing, as the story goes.

Several years ago, my infatuation grew. An article by Paul Smith of the Milwaukee Journal/Sentinel got my attention. A conversation with Dave Zeug, another Wisconsin writer with a deep personal relationship with the Brule, filled in some blanks. And then I read the old-timey stories of Gordon MacQuarrie. The more I learned about the history and mythology of the Brule, the more I felt the need to stand in that north flowing river.

I was warned by a guide 10 years ago, “You better like people.” After two days of light scouting and fishing, the point was appreciated. The Brule is not under-utilized. Parking lots were crowded. Yet, when on the water, anglers encountered were spread out and accommodating of one another. I saw more vehicles than fishing rods.

We scoped out the river access and said hello to other fishermen. Hoping to gather a little intel, and without shame, I revealed to all that I was a rookie. Fishermen with wet boots and tired arms are more likely to share stories, and maybe a little advice to a blatant tyro. For the briefest of moments, the parking lot became the council room of a Brule River lodge, minus the bourbon. They all offered nonchalant insight.

A common theme was commitment. Two gentlemen independently stated the words “for over 40 years.” The man in the van, a Brule River Sportsmen’s Club patch sewn on to his vest, spoke about his time with the river in a calm, somewhat reverent tone.

He lamented once owning a cabin about a mile from where we stood. “I sold it and moved to Arizona,” he said. I envisioned a married couple tired of long northern winters moving to warmer climes. “I wish I still had that place.” I sensed some sadness in his voice.

I showed him a couple fly boxes from my pack and asked him if he saw anything that he would recommend using. He smiled and pointed, “The egg sucking leech.” He then told a brief fishing story to confirm is selection.

Not wanting to violate his space, I sought his blessing on nearby fishing spots. In a position to observe, I saw a veritable machine on the water. Later my wife walked the trail back to the truck, asking van-man how he was doing. “Pretty good,” he responded. “I haven’t died of a heart attack yet.” I have a hunch death by fishing would have suited him.

Only one angler seemed slightly perturbed with our presence. Running and gunning between accesses, he raced into the parking lot, jumped out of his vehicle with damp waders and headed to the river. Seeing Missouri plates, he gave a faint look of disapproval. He politely exchanged pleasantries. He didn’t stay long.

During a lunch break, Montana pulled in and prepared to fish. Another former Badger State resident, his retirement to Big Sky Country was motivated by trout fishing. “I have two days to fish, then I head back,” he said. He was originally from the Wisconsin Driftless Area, another trout fishing mecca.

“You know what they say about fall fishing on the Brule? The scenery’s great but the fishing is so-so,” he said slyly. His love affair with the Brule was well established and there was truth in his words. Steelhead numbers were doing pretty well this fall, but catching is never easy. Fall is when the greatest numbers of fish enter the river. Finding a hole where they might stack up is the challenge. Moving water and hope was all I needed.

We overheard some discussion about private property. There is an abundance of public land and river accesses, but brush busters will eventually encounter private land. In Wisconsin, if your boots are wet, you are okay, but the scuttlebutt is some land owners who historically allowed anglers to walk well-worn paths are fed up with litter and the inconsiderate. We left boot prints only and hauled out any trash we saw.

New experiences like this always create some anxiety until I get my bearings and find a groove. I was mentally prepared. Reading various stories gave me tips on gear and technique. YouTube gave me highlights and a way to experience the river vicariously. I joined the Brule River Sportsman’s Club a few years ago. I have learned this and that from their newsletter and website. I figure any group working on behalf of this precious resource was worthy of a few bucks for support. Van-man affirmed they are a good group. I’ll likely keep-up my membership.

We fished a couple holes and runs pretty hard not far from the parking area, as did the folks before and after us. A few tugs here and there told me fish were present, but timing and technique were my biggest failures. A brood of eight hooded mergansers entertained me mid-day, holding 30-yards above my pool as I fished. They looked annoyed that I impeded their passage.

Forty-six miles of water, the Brule is an extraordinary fishery with a wide-variety of opportunities. Depending on location and timing, resident and lake run fish are available. Steelhead were our target, but Brown and Brook trout, Coho and some Chinook salmon also use these waters.

After September 30, only the downstream portion from U.S. Highway 2 to Lake Superior is open. Its season runs from the last Saturday in March through Nov. 15. Fishing is prohibited from a half-hour after sunset to a half-hour before sunrise. The daily bag limit is five trout or salmon in total. Most fisherman do catch and release, but you will not be shamed for taking a fishing to dinner.

On day two we traveled further north to checkout one of the spots mentioned in MacQuarrie’s writings. Again, we encountered a few others but never felt unwelcomed or crowded.

Two men and a boy of about 12 years old crossed the river where we fished. The oldest of the crew pointed to the boy. “You know who caught all the fish today?” The young boy smiled broadly as he held the hand of the other man while navigating rocks and boulders in the current. “Four fish for him!” A declaration by prideful grandfather, I’m guessing.

As they stepped up the slippery bank, he called back to me. “If you go up stream there’s a nice pool in front of the cabin. It’s worth trying.”

We followed his advice and found the cabin sitting back off a bend in the river. A Leopold bench nearby and landing net hanging in a tree. We fished it hard but failed to catch anything. Except for a nice Brown, we left empty handed but not disappointed. And I’m pretty sure, in the light of the gray misty sky, I saw Mac’s ghost sitting on the bench smiling. I told him I’d be back soon. The Bois Brule isn’t done with me yet.