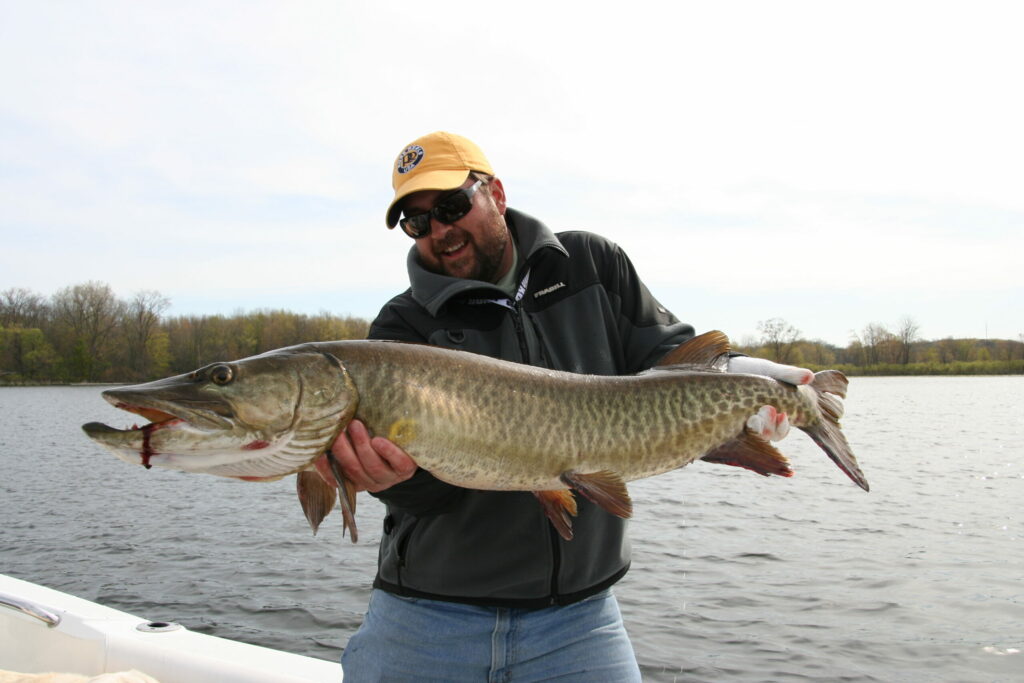 Musky are the apex predator of freshwater fishing. These toothy creatures, which reach lengths of 60 inches and can top out scales over 60 pounds, are not easy to catch, but tangle with one and you’ll know it was worth the effort. While more prevalent in the northern Midwest states, like Wisconsin and Minnesota, musky are caught in lakes and rivers in Missouri, Illinois and Indiana. Fall is one of the best times to catch them as they prepare for winter.

Musky are known as the fish of 10,000 casts. This is of course an estimate, but the point is catching a muskie with any type of fishing tackle is no easy task. If you want the reward and excitement of landing one of these solitary predators, you are going to have to work for one. So it’s not like anyone can tell you exactly how, where and when to go catch one. Musky roam. You’re going to have to cast a lot, try a lot of different lures, fish different structures, different depths, multiple days, and maybe, just maybe, it’ll all come together for you and across your arms will be draped a fish longer than your leg.

Statistics tells us that fishing with a guide drastically cuts down the number of casts you’ll have to throw to land a fish. An Indiana survey of musky guides showed 12 guides operating conducted 2,900 trips in 11 years. That’s an average of 264 trips per year. They boated 300 musky on those trips for an average of 1.14 fish landed per guide trip. I don’t know how many casts you’ll throw in a day, but it won’t be 10,000. The point is, if you want the best chance of landing a muskie hire a guide.

Traveling to musky fish is a lot like traveling for a hunt. You are successful if you catch one. These fish don’t swim in every lake and pond like bluegill or bass. You usually have to hit the road to chase them. Here are a few options.

There’s nothing like fishing the Northwoods in fall. The Turtle Flambeau area of Wisconsin is a musky fishing destination that has been attracting anglers for generations. For me, there is no better time to be there than now. Throwing big musky baits is a laborious task, but when you hook one, you know you’ve just done something special. Land one and you’ll have a memory to last a lifetime.

If you’re into musky fishing down south, Cave Run Lake in Kentucky is a must fish destination. At 7,800 acres, it’s a big body of water, but is small enough to learn given a little time. Numerous guide services operate on Cave Run and all of them will tell you fall is a great time to book a trip. Musky must be 36 inches to keep, but hopefully you’ll strongly consider catch and release. If you’re looking for a specific place on the lake to fish, Musky Bend might be a good place to start.

Bass Lake, located in the Dugger Unit of the Greene-Sullivan State Forest in southern Indiana, is the largest of all the state forest lakes at 222 acres. The Dugger Unit is a heavily fished section of the forest. DNR researchers found musky to be the third most sought after species in Bass Lake. They are also found in Duck Lake and Black Cat Lake within the forest

If you’ve ever had the good fortune to tangle with a “water wolf” then you know Musky aren’t predisposed to kindness. In fact, they’re down right out evil creatures. In my book, this makes them all the more appealing to fish for. Catch one and you’ll likely be hooked for life.

See you down trail…