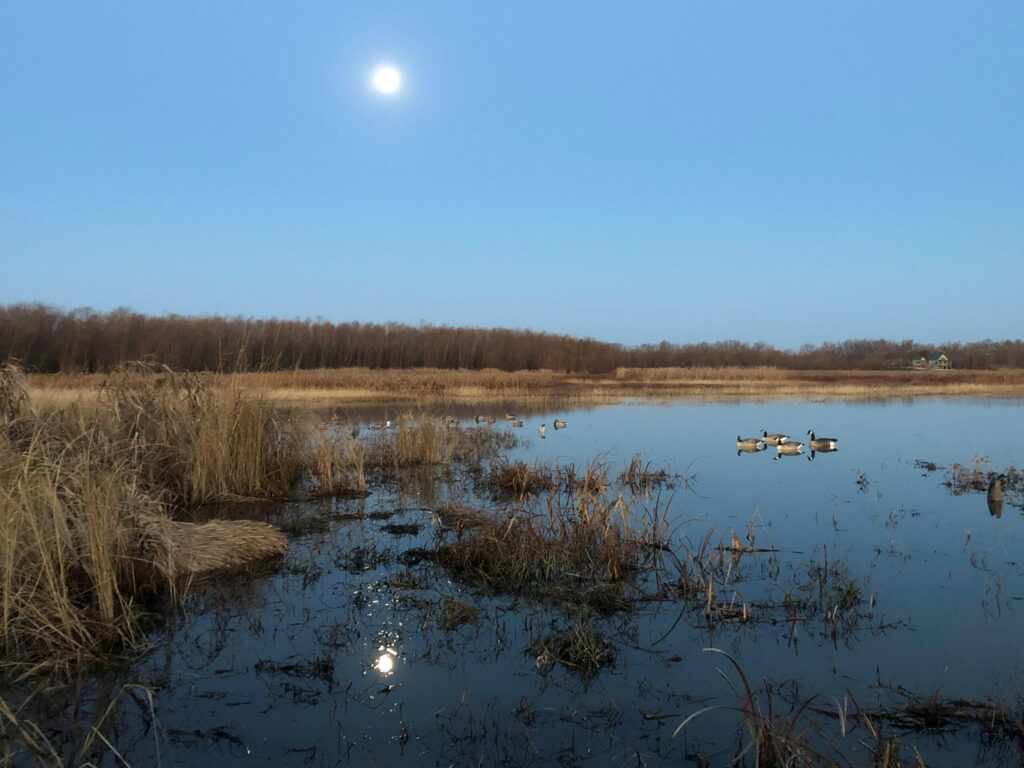 Over the past year or so, I made a new friend and got more familiar with an old acquaintance, although neither of them knows this to be true. None of that, however, kept me from inviting the two of them to hunt waterfowl with me and Swede, another old soul dear to me. And so, the story begins.

You see, there’s this place I can go in my head that allows me to cast-off time, space, and reality. A place where I can substitute at will. A place where I can think about yesterday, today, and tomorrow, and how it all might be different if only for a brief instant. A moment like this when I shared a day with Swede, Gordon, and Jay.

By way of introduction, let me explain that Swede is my grandfather, son of a Swedish immigrant who chose Wisconsin as his home. Gordon is Gordon MacQuarrie, and Jay is Jay Reed; people of a certain ilk know these men by their work or reputation. In that place where I go for dreams and conjuring, all of them, lately, have occupied space. Each one embodies the ingredients of a life toward which my heart and spirit gravitates. And so, I imagine.

I can’t tell you all the details of what happened during our hunt together. Truth be known, it hasn’t really ended yet. But I can tell you it was glorious.

On this day, ducks and geese were plentiful and the shooting was good. Jay, of course, brought Thor and we all felt privileged to shoot ducks for him. Thor did relinquish one retrieve with indignation when a resident bald eagle named Ethel beat him to the draw but no one laughed about it while Thor was present. Gordon didn’t bring a dog but Stuffy McGuffey showed up uninvited if just to check in.

Throughout the early morning speckle belly geese gave us a grand performance. A few fell to the gun when an unsuspecting flock responded to my poor calling, floating on the wind to the decoys. During a slow moment between teal and greenheads, we watched in silence as a group of trumpeter swans flew within 50 yards, their call echoing across the marsh and leaving us all with a simultaneous sense of delight and poignancy.

After the hunt we cleaned birds, ate steaks, and talked. There was brandy and scotch and cold beer too. We talked about ducks, the art of using callers, and departed hunting partners. We talked about dogs, loyalty and love, and Jay reminded us that Spinones are not always what they’re cracked up to be.

We talked about muskies, wooden round bottom rowboats and the ethics of using a live red squirrel for bait. We talked about trout, dry versus wet flies, and the beauty of a Wisconsin brookie. Swede and Gordon discussed the appeal of vertical log cabins, the smell of white pines, and the illumination of pine knots. We talked about war and change and the future. And we all agreed that modern conveniences of the time were mostly not very convenient and a cause of lazy thinking.

When my head hit the pillow Swede and Gordon were into their umpteenth game of cribbage. Jay sat back on the old davenport watching and listening, taking it all in. Thor laid spread out on the floor near the stove sleeping soundly with only an occasional twitch and deep growl. My Brits, Maggie and Mina slept on my bed making it impossible for me to extend my legs fully, but I didn’t care. McGuffey left before dark as he had somewhere else to be.

In the morning we shared coffee and breakfast, said thank-you and good-byes and made a promise to get together again someday soon. A rendezvous in Rhinelander to fish for muskies sounded promising but everyone perked up when Gordon suggested fishing the Brule. Jay and Thor had been there before but Swede had not, and I’ve only dreamt of casting a dry fly into those waters. A trip to cast and blast sounded best. Fish and birds on the same excursion would make the dogs happy and the men happier – and so it went, my time with Swede, Gordon, and Jay.